The Work of this Generation 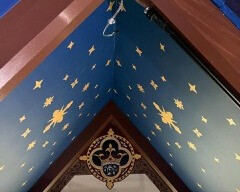 We are at the halfway point of the expected restoration of the Historic Church renovation.  At the beginning, we thought with the input of  E. W. Burman, our general contractor, that this would be a six-month restoration project. Today that looks like a pretty good estimate as we complete the first three months of work.  We are still on target for a completion in October, the sixth month, and within the budget as drafted. 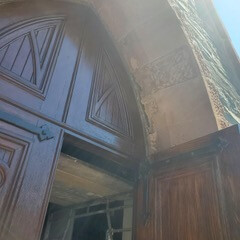 One of the new costs, though not within our initial scope of work, is the repair to the external brown stones at the south entrance and the bridal entrance.  As we were completing the caulking of the doors, as shared in my last note, it was apparent that without repair to certain aspects of the brown stones which have deteriorated, water leakage might certainly reoccur.  We hope to have those repairs completed next week after we review the sample repair mortar which Fish, our expert mason, is preparing.   The cost is well within our contingency budget.  We have been so very lucky on this project to have such a dedicated and professional work crew and general contractor.  That has certainly allowed the project to proceed smoothly and on time. 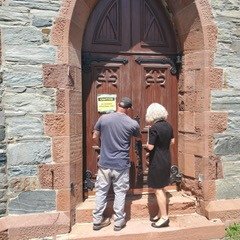 We repaired the wonderful and historic church doors, and they are now being stained.  Over the years they had been pulled off-center and would not close snugly.   Keeping these doors was an essential part of the historic mandate and restoration project.  These original doors are beautiful and provide a historic context for the church, having served thousands of parishioners over the life of the church.  Gene Cabral,  the supervisor of the project, and our rector are looking  at his excellent repairs to the south main doors in the picture above.  He is one of those sought-after individuals who is an expert in carpentry, electrical, plaster and painting, knowing how to do the job correctly and when each aspect needs to be completed to keep the job on track.  We are certainly lucky to have him as the supervisor of this project. 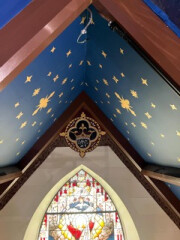 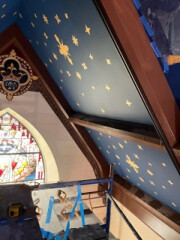 The internal painting is almost complete with punch list items to be reviewed and completed by the end of next week by Gene Cabral, supervisor of the project.  The ceiling in the chancel, above where the altar will be repositioned, looks terrific with the original gold stars and crosses stenciled on the blue ceiling background. 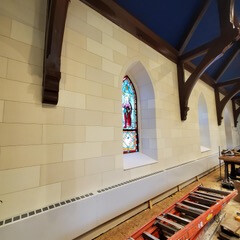 The four-color palette faux sandstone blocks on the walls look like one of the great cathedrals of Europe.  That faux sandstone block pattern etched into the plaster and painted was on the original wall and discovered when the wall canvas backing covering the many cracks was removed.  It was not an easy task to recreate that look and to enhance the entrances and the sixteen windows and doors with just the right artistic touch of stone etching, but it was expertly accomplished.  When the church restoration is fully completed, we hope you agree that it is stunning.  The sad condition of the walls and ceiling, which had significant water damage in many areas, is now gone and not noticeable.

Alex Allard found a wonderful historic picture of the ceiling in the narthex , the southern entrance, which had a coffered painted ceiling design between the beams.  We copied this historic design.  The damaged walls of the sacristy have been repaired and painted.  A new counter and replacement sink have been installed as well.  Rather than merely replacing the ceiling light fixture in the sacristy, we are installing a ceiling light fixture and paddle fan to help cool that room, which we heard becomes very warm.

As previously shared, the repointing of 40% of the exterior church stone walls which we planned to avoid future water seepage into the newly plastered and painted walls is done.  Unfortunately, there is still no discovery of that elusive cornerstone, but we keep tapping on the stones and looking. 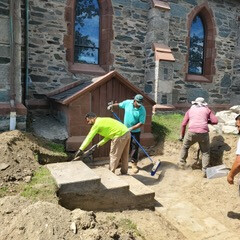 We are now building a small stone knee wall on each side of the entrance to the basement on the north face of the church facing the cemetery. It is a significant life-safety item after the new requirements from the terrible Station Fire in West Warwick.  The outside doors previously did not fully open as earth had moved into their opening path, and water from the roof had begun to deteriorate the foundation.  In the event of a fire in the basement, where we have our boiler, it is essential that anyone down there have an ability to freely get out of the space.  The space also requires two ways of egress.  The other egress will be the original stairs in the back of the church, which will have a new rod iron railing system installed.

The path leading out of the basement goes towards the northern portion of the cemetery where many distinguished individuals and former parishioners of the church are buried.  On Sunday, November 6 as we celebrate All Saints' Day, Alex Allardt will lead a  tour of the cemetery  and will highlight the saints who have gone before us.

One notes the line of now large evergreen trees across the cemetery towards the old Oakland homestead from the church.  Sarah apparently, planted a row of spruce hedge, so no one could see her walking to the church from her Oakland Farmhouse.  Look carefully and you can imagine her going from the Oakland Farm house to the St Mary’s Church.  She would be hidden from East Main Road, which existed since before 1776 and was used for horse drawn traffic.  Until this week when East Main Road was finally partially repaired and repaved, there was an argument that the 1776 road may have been better than the one we endured for so many years till 2022.   (But why did they not do the whole road instead of just sections?  A question for the ages!)

So, it is our hope that those in this beautiful cemetery, who loved St Mary’s Church, would be happy today for the generosity of so many to restore their church and pleased with the final restoration when it is completed.

Posted by Ron Machtley with
(Login/Register to leave a comment)

The Work of this Generation Feed

Keep up with the restoration of the Historic Church as St. Mary's.