1843
Miss Sarah Gibbs of Portsmouth, a devout Episcopalian and member of Portsmouth society, was determined to bring the church to the people of Middletown and Portsmouth.

Oakland Farm, Miss Gibbs' home, had been in the Gibbs Family since 1796.  In November of this year, The Rev. Hobart Williams was invited to Portsmouth to begin the establishment of an Episcopal Church in Portsmouth.

The first service of this new faith community was held was on December 17th,  1843 - the third Sunday of Advent.   The Rev. Williams described the temporary quarters of the church as a "mere shed."

1844
Ms. Gibbs donated land, 88 acres formally known as the Potter Farm, to the Episcopal Diocese of Rhode Island, through a deed of trust, to "furnish sites for a seminary and a church"

1847
Bishop Henshaw presided at the laying of the Church's cornerstone on September 2nd.  The church was designed by Richard Upjohn, a famous English architect, who also designed Kingscote and the Edward King House in Newport, Trinity Church in New York City, and many other churches around the country.

1852
On Ascension Day, May 20th, 1952, Bishop Henshaw once again visited St. Mary's to consecrate the completed building.  The Bishop's journal for that day reads, "I consecrated St. Mary's Church, Portsmouth, a gift of faith and love from a pious and magnificent churchwoman, Miss S. Gibbs, costing about $11,000."

1936
The Rectory, of Rhode Island colonial design, was completed.

1970
Gibbs House, named in honor of Sarah Gibbs, was built.  Gibbs House functioned as an Administrative Center for St. Mary's until 2012.

2012
The New Parish House was completed. The Parish House houses the administrative offices, a large, modern kitchen, classrooms and workshop rooms, and a common meeting area.  St. George's Chapel, named after the Newport Church who joined with St. Mary's in 2007, lives here as well.  The Chapel is a glorious, multi-windowed room that looks out on the St. Mary's campus.  The room itself is surrounded by the stained glass windows that were in the original St. George's Church.

St. Mary's has had 14 rectors, from the Rev. Hobart Williams in 1843 to our current Rector, the Rev. Jennifer Pedrick.  Pictures of all of St. Mary's Rectors may be viewed by clicking on the picture of the pulpit, below. 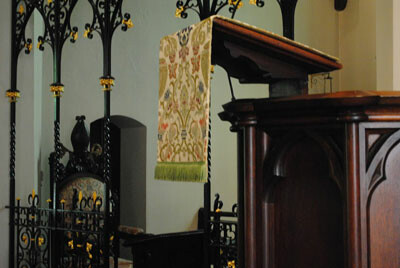